Ever since a tiny little power adapter for the Apple IIgs was made available by James Littlejohn, I’ve always wanted to see what I can put into that cavernous space created by the absence of the old power supply.

The old Apple IIgs power supply takes roughly 1/5 of the internal space of the IIgs case.  In 2007, a tiny 2.5” x 2.5” power adapter called the LittlePower adapter was made available to allow a standard ATX power supply to be used.  I bought my LittlePower Adapter IIgs from ReactiveMicro at that time.  I think it’s now known as the LittlePower Flip and is sold at UltimateApple2.  Combined with the similarly tiny ATX Pico power supply from mini-box, it frees up a lot of space inside the case.

A plan for putting a standard 5 1/4” peripheral in there materialized and stayed in my workbench waiting to be allocated some time.  A recent long weekend gave me that time to grab some tools and start hacking at the case. 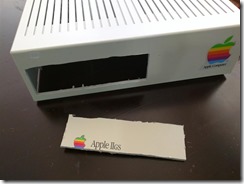 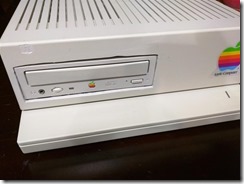 I’m not a professional case modder and it shows.  I was experimenting with the attachments on my rotary tool and the mistakes are evident in the top side of the hole.  This was more a proof-of-concept than anything else.

It now allowed me to use my Apple II High Speed SCSI Card to connect both an internal solid state drive (scsi2sd from Michael McMaster) and a SCSI CD-ROM device.  Remember to set the booting drive with a higher ID in the SCSI chain. 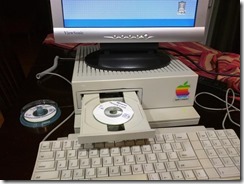 Internally, with the 5 1/4” device in there, you would lose the use of Slots 1 and 2.  I was able to squeeze the scsi2sd solid state drive towards the rear of the case, and the IDC cable runs underneath the device into the SCSI card on Slot 7. 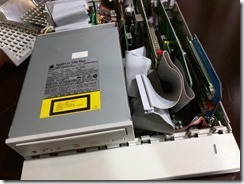 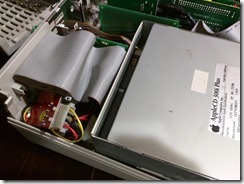 I probably violated a dozen of best practices to electronically isolate components from each other.  I didn’t even use cardboard shielding between some cards in the slots.  So please, if you want to do this mod, do it right and take the necessary precautions.

To keep the 5 1/4” device somewhat steady in place, I attached a mounting plate underneath the device.  These mounting plates are the same ones used for these devices in older Macintoshes, particularly the LC series.  You can still readily buy them as spare parts.  I drilled a couple of slits in the mounting plate with a rotary tool.  The slits are positioned in such a way to mate with the two plastic standoffs from the bottom of the case that were formerly used to keep the old power supply in place. 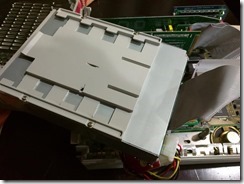 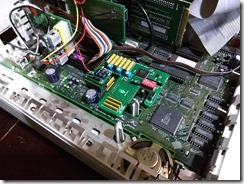 Using the CD-ROM was frankly just the proof-of-concept.  Since I rarely use a CD with my IIgs, it would be more appropriate to use an external SCSI CD-ROM device.  I will probably replace it with the SCSI floptical drive I used in an older post.  Or even with one of those SCSI-PCMCIA devices having the 3 1/2” form factor and having the PCMCIA/CF/SD slots in front for easy access.

As originally planned, the SCSI CD-ROM will be rarely used.  Instead, I first tried with a SCSI floptical drive and was able to mount 1.44 MB MSDOS disks.  The GS/OS MSDOS FST driver only has read capability, so I can transfer files into, but not out from, my Apple IIgs.  The drive is also an MFM-encoding drive, and cannot read the GCR-encoding 800 KB disks used with the standard IIgs external disk drives. 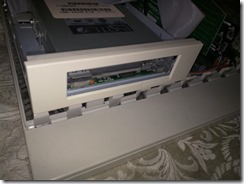 I suppose I could reformat a diskette as a 1.44 MB ProDos read/write block device, which should make it look like a very small-capacity hard disk.  However, I eventually settled for one of those SCSI-CF devices where I could use higher-capacity cards to transfer files in and out.  The SCM Microsystems PCD-50B provides multiple card readers in a 3.5” form factor.  With the standard adapter bracket and faceplate, it substituted into the 5.25” opening.  The only issue with this model is that the multiple card readers are addressed using multiple LUNs with a single SCSI ID.  I think the Apple II High Speed SCSI card firmware (or driver) only makes use of LUN #0, which is the PCMCIA slot.  In order to use CF or SD cards, I had to put them in one of those PCMCIA-CF-SD adapters. 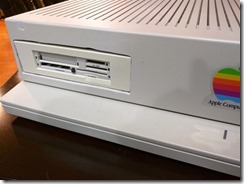 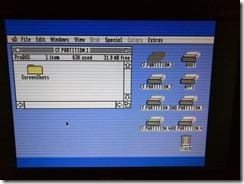 This entry was posted in Retrocomputing and tagged IIgs, SCSI. Bookmark the permalink.