The standard Apple IIgs has a LocalTalk port for AppleTalk networking.  To bridge to Ethernet and connect to a Linux system, you would need a LocalTalk-Ethernet bridge or router.  I am currently using a Farallon EtherWave adapter, but others may work as well.  Some adapters and routers that *may* also work are:

Install the netatalk package in your Linux system.  From a Debian distribution (and similar ones like Ubuntu and its variants), this is done through the Advanced Packaging Tool:

The AppleTalk daemon needs to be enabled in /etc/default/netatalk.  Look for the ATALKD_RUN setting and set it to “yes”.  You will also need to modify the configuration file /etc/netatalk/atalkd.conf.  Mine has the following:

In the standard package installation, netatalk only listens on TCP/IP (similar to what the AppleShare/IP product does) and not on DDP/EtherTalk.  The configuration file /etc/netatalk/afpd.conf needs to be edited.  I have the following:

The “-ddp” is what enables the afpd daemon to listen on DDP/EtherTalk.  You can also combine both “-tcp” and “-ddp” options into a single “-transall” option.

You’d also want to create your additional users who will be allowed to attach to netatalk, unless you only need guest access.  If guest access is desired, the AFPD_GUEST setting in /etc/default/netatalk should pertain to a valid user that has a home directory.

As the valid user, I create an A2BOOT directory under my home directory.  The first entry points to my A2BOOT directory which will be exported by netatalk as the “A2BOOT” volume.  I have another entry that points to the first mount point of a USB drive that I subsequently attach to the Linux system and mounted automatically by the Linux usbmount package.  This volume “USB0” becomes another way for my Apple IIgs to transfer files to and from my PC through the USB drive.

Once all the configuration has been completed, issue the following to restart netatalk:

The Apple IIgs uses one of only two authentication mechanisms: Clrtxt or Randnum.

To attach to a netatalk volume using cleartext authentication, use Marsha Jackson’s patched AppleTalk CDEV.  The standard CDEV that comes with System 6.0.1 sends the password incorrectly across the network and netatalk returns an authentication failure.

Netatalk needs to be recompiled if you need the Randnum UAMS (authentication module) or the a2boot (netbooting) capabilities.  The Randnum UAMS, and the corresponding afppasswd utility to set the password, are dependent on cryptographic libraries.  This is usually provided by the openssl library package, which certain Linux packages are reluctant to link to.  I’ve got some source patches to use libgcrypt instead of openssl, but they have yet to be sent upstream and included in the standard distributions.

For the meantime, the netatalk package can be compiled and installed (with Linux root privileges) using:

You can also apply Steven Hirsch’s file timestamp fix by commenting out line 827 (as of the netatalk source package 2.1.2) of etc/afpd/file.c where the value of the change_date variable is being set during the AFP FILPBIT_ATTR command before building the package.

I have pre-built binaries for the Seagate DockStar (armel architecture) running the Debian “squeeze” distribution at //peterwong.net/files/apple2/netatalk-armel-files.tar.gz

To accommodate netbooting, the a2boot daemon should be found in /usr/sbin/a2boot and needs to be enabled in /etc/default/netatalk.  Look for the A2BOOT_RUN setting and set it to "yes".  Create the /etc/netatalk/a2boot directory and copy the IIe and IIgs network boot blocks into that directory.  The boot blocks can be found in //peterwong.net/files/apple2/troika-3.tar.gz

Modify the /etc/init.d/netatalk script to invoke the a2boot daemon.  A sample modified script is included in //peterwong.net/files/apple2/netatalk-armel-files.tar.gz

Issue the following to restart netatalk:

To netboot an Apple IIgs, we need to temporarily create an AppleShare boot disk and perform a Network Server Startup installation from the System 6.0.1 installer.  An AppleShare boot disk can be created from the installer itself, but pre-made disk images, updated with Marsha Jackson’s patched AppleShare CDEV are available at //peterwong.net/files/AppleIIgsBootDisks/AppleShare-ROM1.zip (for ROM1 machines) and //peterwong.net/files/AppleIIgsBootDisks/AppleShare-ROM3.zip (for ROM3 machines).

Aside from the patched AppleShare CDEV, the AppleTalk-related “Start” application found in the System 6.0.1 SystemTools2 disk should also be patched in the same way.  Geoff Body has provided the patch information and a patched “Start” file is available at //peterwong.net/files/apple2/AT.START.SHK.  The “Start” file gets installed in the SYSTEM folder on the A2BOOT volume.

An additional file needed during netbooting is the user’s ATINIT file.  This informs GS/OS what startup program to launch.  I’ve provided an example ATINIT file that simply launches the GS/OS Finder application located in the System folder of the A2BOOT volume.  You can edit this file using a binary file utility and change the startup application and the startup prefix.  Note the string length value on the byte preceding the actual strings.  The Apple IIgs Technical Note #77 describes the ATINIT file format. 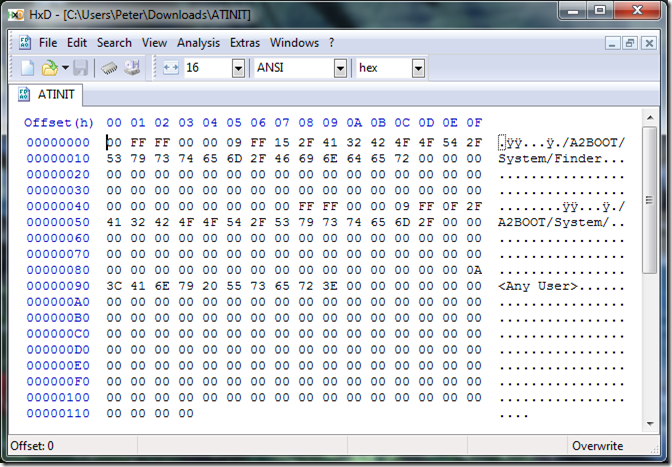 For example, using the A2BOOT volume of the user “peter”, I create the ~/A2BOOT/USERS/PETER/SETUP directory and place the file in here.  Note the directory name corresponding to the user name.  You can either place the file from either within Linux or within the GS/OS mounted volume (from booting the AppleShare boot disk).  In the Linux system, the full directory path could be like /home/peter/A2BOOT/USERS/PETER/SETUP.

Pictures of the Apple IIgs netbooting from netatalk: 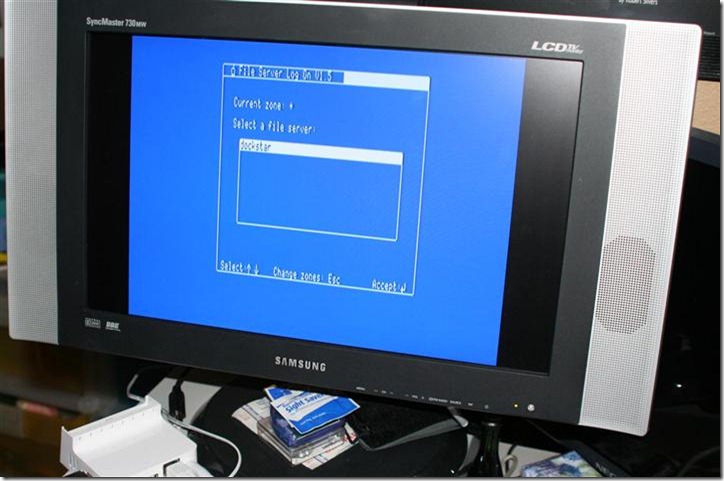 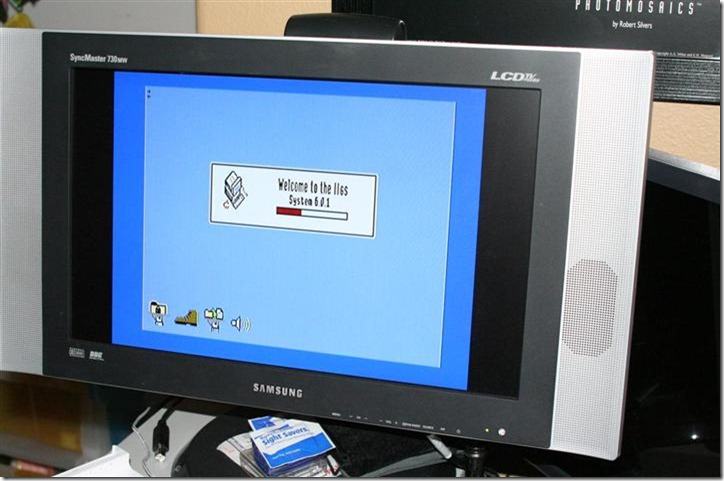 Thanks to Steven Hirsch for his efforts in getting Apple II support in netatalk; to Geoff Body for his great insight into AppleTalk and AppleShare, and Ivan Drucker for his work in Apple IIe netbooting that inspired me to investigate the same for the Apple IIgs.  A simplified description of netbooting an Apple IIgs from AppleShare 3.x running on a Mac can be found at http://www.vintagemacworld.com/iigs_rb.html.