Have you noticed how consumer packaging for certain electronics have shrunk over the years?  I’m amazed with how that’s happened with digital cameras.  My oldest digital camera was an Apple QuickTake 100 which was one of the earliest consumer digital cameras (providing storage for 8 whopping 640×480 digital pictures or 32 of the smaller 320×240 pictures).  Its box was about the size of how netbooks are packaged now — about a couple of reams of paper stacked upon each other. 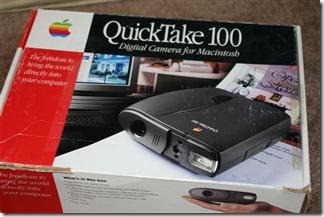 Going through several digital cameras over the years, packaging was significantly smaller.  I’ve had a Minolta, a Kodak, and a Nikon digital camera, all packaged about the same size.  Judith needed a new point-and-shoot camera to quickly catch pictures of the family during events, without having to lug around our digital SLR.  We ended up getting a Panasonic HF-20 and the size of its packaging was a mere several CD jewel cases.  Just enough to stick the camera in, with some accessories, cables, a CD, and a thin “getting-started” booklet.  Just amazing! 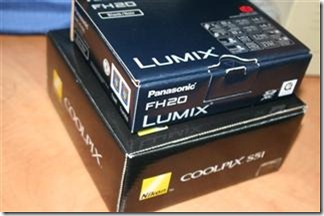 This entry was posted in Around the House and tagged devices. Bookmark the permalink.